The wine roads... The authentic character of a wine goes perfectly with the landscape and its territory here because they were made ​​of real routes, such as the Wine Routes that allow to know the beautiful hills enjoying good wine. The Wine permit, therefore, to tourists, to visit wineries and wineries among the most famous in the world of pristine landscapes and medieval villages of rare beauty.

The main Wine Roads of Marche are those of the Verdicchio Jesi Castle, Verdicchio of Matelica, Rosso Piceno Superior, Lacrima of Morro d'Alba, Red Conero and Bianchello the Metaurus. 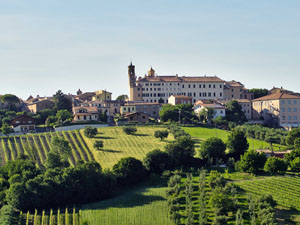 Lacrima of Morro d'Alba surrounded by arcades hinged to the walls. A 10 km from the sea, on the line of hills between Senigallia and Jesi, Morro d'Alba dominates the surrounding countryside. Morro d'Alba today retains many vestiges of its past: the city walls and the interior walkway "The Shoe", the beautiful underground, the City Palace, the church of San Gaudenzio and that of SS. Annunziata, the milestones are only for those who want to retrace the historical events of this small farming village. Although modest in size, the country boasts the distinction of being the only fortified town in Italy, to have the walls covered, for their entire length to a parapet, covered and equipped with arcades: the famous "shoe ".. 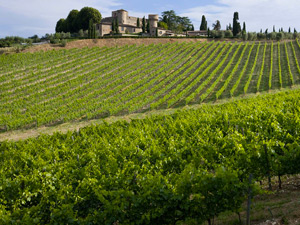 City of ancient and important industrial traditions, which have led, since the late nineteenth century, the name "Milan of the Marches". As evidence of its glorious historical past, that in the twelfth century has seen too little capital Respublica Aesina, retains an old town with interesting monuments, still surrounded by a wall of the fifteenth century intact. A lavish historical center: the Palazzo della Signoria, the Duomo, the Pinacoteca, a Diocesan Museum is particularly rich. For those who love wine, Verdicchio Jesi remembers, and rightly so: the Doc is right at home here and in the surrounding countries. Among them, Montecarotto, city of wine and oil, is worth a visit to the imposing walls, the clock tower, a symbol of the country, and the church of SS. Annunziata, which dominates the town. 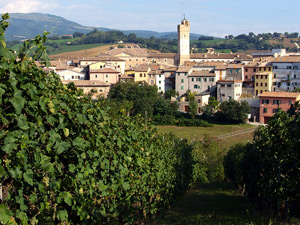 In the heart of the Marche region, starting from Frasassi, a true marvel of creation with its salt-like underground cathedrals adorned with stalactites and stalagmites that stretch for thirty-five miles, branching off the area where it produces the unique Verdicchio di Matelica . The most famous caves in the world are included in the municipality of Genga, a small medieval castle nestled in the vast Regional Park of Gola della Rossa and Frasassi. It then goes on to Fabriano, the city where as early as the thirteenth century, began the manufacture of paper, which can trace its origins at the Museum of Paper and Watermark. 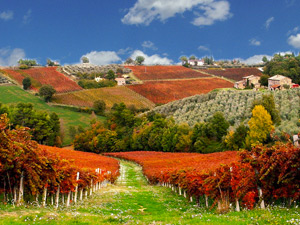 Although part of the specification of the Rosso Piceno, they are two very different wines for both features that geographical area. The route of Red Piceno wine through the small geographical area in which the wine Doc reaches greater successes. The route starts from Offida, whose historical center is enclosed within the ancient Castle walls (sec. XII), the starting point of an ideal route through the streets and squares of the town, a path along which there are monuments of great historical, artistic and architectural testimony of an illustrious past. In the main square stands the Town Hall, an elegant building dating back to the eleventh and twelfth centuries that still represents the heart of the administrative life of Offida. Inside the Town Hall Theatre near the Golden Snake, a true jewel of Baroque conception of such a proscenium or, as commonly called, the Italian, with diagram "horseshoe".